by Darryl Purpose with Julie Beaver 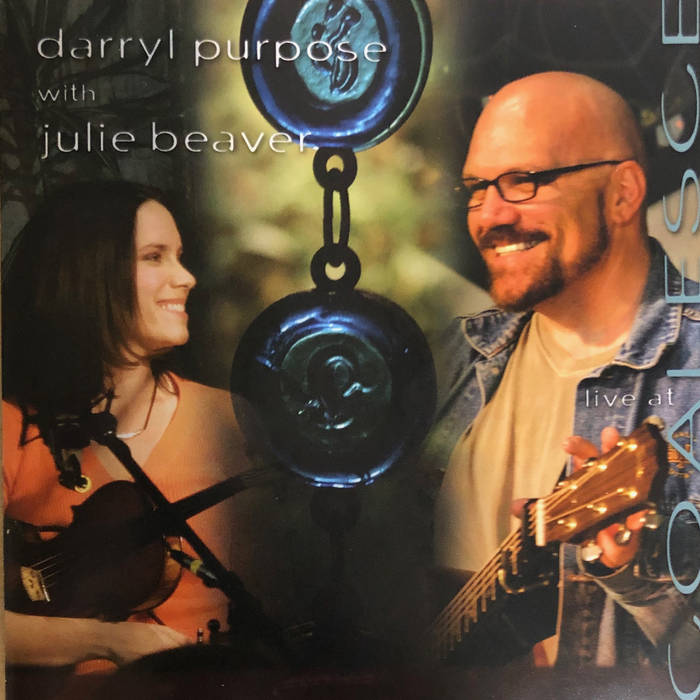 Ivano Bersini I listened to the beginning of the first track and immediately fell in love with the album. Thank you very much 💖

Sometime last winter I thought that it might be a fun thing - to have a tangible souvenir from these shows that Julie Beaver and I have been doing in recent years. So I called Julie, booked a night at Coalesce and persuaded hootmeister Steve See to MC. I asked Rick Sutton to bring his remote recording gear, and invited a few friends and fans to play audience. A few days before the event a friend suggested I set up a video camera for the people that had never been able to see us perform. I called Julie's dad, Paul, knowing the video he'd already shot of his daughter would fill a small library. I asked him to bring his camera to the show. He brought five. What you have in your hands, be it CD or DVD, is most of what happened that night. We hope you enjoy it.

Coalesce:
1) to grow together
2) to come together so as to form one whole; unite
3) mix together different elements

Many believe there are no coincidences in life. If so, such is the case with the title of Darryl Purpose's new recording, Live at Coalesce. Named after the venue where it was recorded, this title seems to mirror the confluence of events surrounding it.

With Live at Coalesce, Darryl brings together diverse elements of his career. First, the tracks featured on Live at Coalesce spans throughout five records he's recorded from 1996 to 2002. Second, Darryl released a beautiful companion DVD of the Live at Coalesce performance. And third, he is combining these new releases with the Coalesce Bike Tour 2006, which coincides and commemorates the 20th Anniversary of the Great Peace March for Global Nuclear Disarmament, which he walked in 1986. The route that he and bike partner Kevin Deame are taking also retraces the march's original route. The Coalesce Bike Tour 2006, which started on April 23 in Santa Monica will culminate in a reunion of those who participated in the '86 Peace March in DC on June 23. You may recognize Kevin Deame's name as the co-founder with Darryl of the Second Strings Project, with whom he collected over 15,000 sets of barely-used strings to donate and send to needy musicians throughout the world.

Live at Coalesce features violinist/vocalist Julie Beaver, with whom Darryl has played various shows over the past few years, including tours of Ireland and England. Julie's lyrical and confident approach to fiddle playing adds a new dimension and dynamic to Darryl's shows. It's not only wonderful to hear, but is a treat to watch their interplay on the DVD.  You get a chance to hear Julie sing on several songs, but on Track 13, "Late for Dinner," Julie takes the lead and Darryl harmonizes the chorus. Darryl wrote this from a women's point of view about a man who walks out on her and her real feelings as she's imaging what she'd do if she ever saw him again.

On Live at Coalesce you'll hear Darryl sing some of his most requested songs, including Mr. Schwinn, Track 16, appropriately titled for a song that coincides with a bike tour (!) and Track 2, "California -Rutherford Hayes In The Morning." Although Darryl wrote or co-wrote most of the songs on the CD, he also includes a Dave Carter song, Track 3, "Red." Darryl met Dave at the Sisters, Oregon Folk Festival in 1996. Dave was the judge of the songwriting contest, because he had won it the year before. Darryl likes to say that when Darryl won, he figured Dave had good taste and they became fast friends. Darryl calls Dave his favorite songwriter in the world.

Darryl and Julie's relaxed yet expressive live performance is complete with some of the intro's as separate tracks.