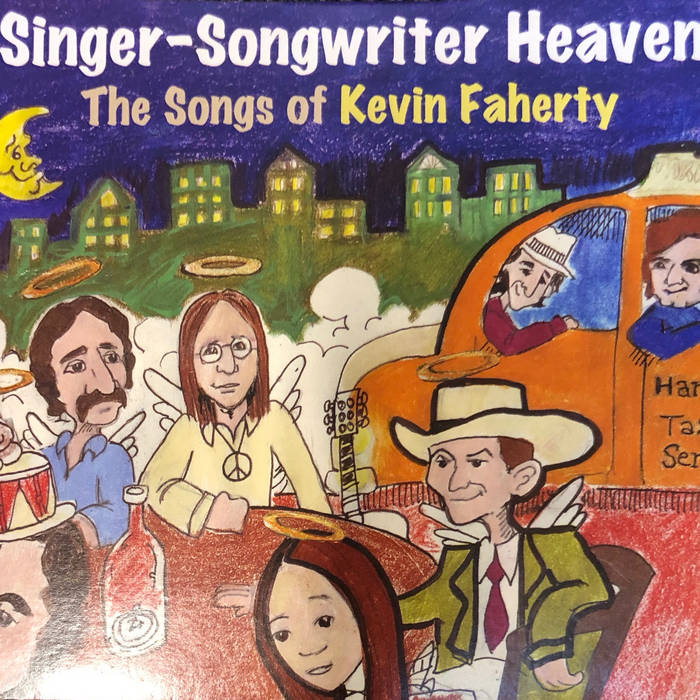 This album is 20 songs, written by Kevin Faherty, performed by 20 of his closest friends, including himself!

The first song of his I ever heard was “Singer-Songwriter Heaven,” as performed by Darryl Purpose. And I loved it, not only because it’s funny, which it is, or because it names many of my idols, which it does. I loved it because it tells song writers that what we do matters. It tells us that what these guys in the song did – even the ones who were secret heroes when they were alive, known only to those in the know – has lasting meaning in our lives. That although the world keeps spinning and the future keeps coming with all its chaos, sorrow and madness intact, that what Harry Chapin wrote, or Steve Goodman, or Townes Van Zandt – still matters to those of us who were touched by their brilliance. And will always matter. That songs are eternal. And that after the world of today is gone, the thing that emerges when the dust settles is the song.

So when word came down the wire (or, more accurately, the wireless), that Darryl was inviting friends and fellow singer-songwriters to join him in a musical tribute to the guy who wrote “Singer-Songwriter Heaven,” it seemed like a good idea. Not just because it’s a great song. But also because heaven on earth for singer-songwriters would be something like this. Something in which all your pals, who also happen to be singers and/or songwriters, get together to sing your songs, and even make an album. It’s an honor few songwriters ever get, especially when they’re still alive. And what’s better for a songwriter than being heard? It’s being sung. And Kevin is thoroughly sung here, and by those who love him.

And this matters. Because when a whole circle of songwriters sing the songs of a fellow songwriter, you know that guy is good. It’s one thing to get the adoration of civilians. But to get it from your fellow songwriters, that matters more, since these are people who have been in the ring, like boxers saluting a fellow boxer. They’re the ones who know what it feels like to get knocked down more times than not. And they know the meaning of the fight, and what it takes to still be standing.

The performers here are all artists, after all, who have their own careers to champion, their own songs to write, their own albums to record. Plus they live in the midst of this mayhem we know as modern times, in which there’s hardly enough time to think. So for all these folks to take the time to do this – to learn one of Kevin’s songs and record it, and do it with so much passion and soul – that says more than ever could be expressed in mere words. Add to that the fact that not one person Darryl invited to participate said no.
Bob Dylan once said the world doesn’t need anymore songs, that if no one ever wrote another, we’d be fine. He then added a key loophole: “Unless someone comes along with a pure heart.” If Dylan heard the songs of Kevin Faherty, chances are he’d hear that pure heart. Because Kevin doesn’t write songs for money or to fill out his next album. He writes songs because he’s wired that way. He writes, as Townes Van Zandt put it, for the sake of the song.

But although he writes his songs not for fame or fortune, he knows they matter, and he wants them to be heard. Countless stories of him flitting like a firefly from campfire to campfire during Kerrville nights, playing one of his amazing songs and moving on, show that although getting a record deal, or even making his own CD, hasn’t ever been a priority, that he does want his songs to be heard. He wants that connection all songwriters want. But he wants it to be pure. And that he likes playing his songs for his fellow songwriters makes sense, cause he knows songwriters listen, and will understand. He’s also there to champion his fellow songwriters, and to revel in their words & tunes & thoughts. And to be there in the audience when they come to Nashville, often every night they play, even those nights when he’s the only one there.

And that brings us here, to this album of Kevin Faherty songs, and to that “state of mind called alpha and omega” as he wrote in the title song of this collection, “where now is always sooner and sooner is never later.” It’s that place of timeless knowing, where the song is everything, and time stops, and we’re touched by spirit, moved by the simple and poignant wedding of words, melody and guitar chords in rhythm.

Bing Crosby with a twang. That’s what he sounds like to me – that deep, dark honeyed tone delivered in such a relaxed, mellow style, speak-singing the words a lot, and dipping down for those repeated bass pedal tones, like a bassist’s thumb in rhythm on the lowest string. Hats off to Darryl not only for wrangling together this posse, but by making it happen by cajoling Kevin to record some of his songs directly into Darryl’s phone. By hearing these phone sessions, and other recordings Darryl drummed up, suddenly I heard what everyone had told me about how much they love this guy: his voice and style are so unassuming, so relaxed and friendly, that he charms you into listening. I already knew the songs and the sly, understated brilliance in them. But then hearing the guy himself – not unlike hearing Dylan do his own songs after knowing first the famous versions by The Byrds and Peter, Paul & Mary - you see the whole song in its purest form, straight from the source.

He’s got the gift. That gift given to the greatest songwriters: the vigor and vision to mix up music with just the right blend of wisdom and insight and humor and heart. Some people are just born with it, and he’s one. These are sturdy songs, built to last. They’re not gonna fall apart on the street, like a cheap watch. And they reveal themselves slowly, so you can listen to them over and over (using that “continuous repeat” button he names in “The Idea”), and they don’t wear out. It’s because they’re not obvious, nor are they overly complex. The music he writes is friendly and uncontrived; warm country-folk melodies that breeze off his guitar and lure a listener gently in a song before you even know how deep these waters really are, like looking into a pond and realizing there’s an ocean there. But suddenly he’ll hit you with a line like “trying to blow out a picture of a candle” and you realize he’s just said volumes about the distance between art and life, and the gulf that can exist between what we imagine and what’s real. And he’s said it with only a handful of words.

Time and again listening to these songs there’s the happy revelation that this guy’s a master at translating some seriously heavy concepts into simple language, such as the idea that the best revenge is forgiveness (from “The Perfect Revenge”), or the zen message of acceptance that even tough lessons are a gift, and that it’s never too late to learn something new (in “The Lesson”), or the thought that humans shape their own lives, as opposed to being shaped by them (in “Placement”). He takes big ideas, the kind that are hard enough just to say with words, let alone express in a song, and makes them sing. Often simple lines fly by with such easy grace that they seem familiar, and yet you realize nobody’s phrased anything quite this way before, as in “Placement” when he writes, “Had a best friend who I counted on like she was my next breath/ But that’s too close for comfort, so no surprise she left…”

He’s great at being funny in songs, which isn’t easy to do, because nothing wears out faster than a joke. But he knows there’s no better way of getting across a deep thought in a song than cloaking it in a joke. Humor catches people off guard, and when they’re laughing, as in “The Idea,” suddenly he slips in something heavy and even somewhat subversive, like the idea that man invented God, and not the other way around.

And he doesn’t come out preaching, saying this is the truth; instead, he just tosses it out as something to consider, like a friendly guy at a bar over a beer. Like a savvy preacher, he knows people start to fall asleep if he pontificates too long about spiritual stuff. But as soon as he tells a joke, people wake up. And in that moment, they listen.

Kevin even takes a few slugs at his fellow songwriters, but does it in such a funny way, in “Singer-Songwriter Heaven,” that it works, and yet the message is clear: Number one: it’s these guys, Chapin, Lennon, Hendrix, Van Zandt et al. - these guys that we should measure ourselves against, and not whatever’s number one on the Country charts or the Pop ones. This is the bar to reach for, he says without really saying it. And he delivers the punch-line by putting it in the mouth of a character, which is, in this instance, a haiku summary of the sorry state of modern songwriting: “Mucho pointless chorus, and ditto pretentious verse.”
His songs aren’t pretentious or pointless. And like all the songwriters named in “Singer-Songwriter Heaven,” his songs also give songwriters something great to aspire to, and to measure their songs against. He raises the bar high, and he expands the playing field by showing us there’s new places to go to in songs, new thoughts to be expressed, new problems to be solved. That there are no limits to what can be done, and that the only unimagined songs are the ones we haven’t imagined yet.

So sit back and enjoy the songs of a songwriter’s songwriter – who can genuinely be considered as such since these songwriters here have stopped everything they’re doing to do this. It’s the kind of thing that doesn’t happen much anymore. But it’s happened for a reason. His songs are beautiful and consequential in a world of ever decreasing beauty and consequence, and if you take the time to listen, and to pay attention, it won’t be time wasted. These songs make no promises they can’t keep. They’re deep, they’re funny, and they’re from the heart. And you can’t ask for much more than that.

Paul Zollo is a singer-songwriter and the author of ‘Songwriters on Songwriting’.