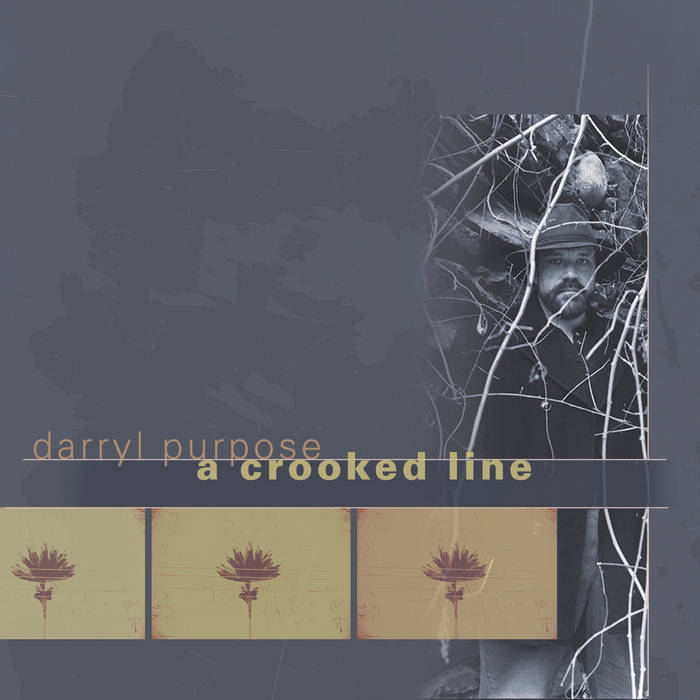 Darryl Purpose has never taken the high road, and we're all the better for it. As a teenager, he carved out a distinguished and somewhat shadowed career as a professional blackjack player. In the mid-1980s, he joined a linear band of on-foot protesters called The Great Peace March, traversing the nation's service roads in a mad effort to stop nuclear madness. But it's in the past five years, as a full-time itinerant songster, that Purpose is fully realizing his calling. Like a long musical line before him and to follow, Purpose is a dramatist for the dispossessed, a chronicler of those Americans who, by choice or by chance, live on the heart's back streets, rising through the crooked lines like leaves of grass.

Purpose calls himself a "singer-songwriter." That's a fairly new term that brings to mind luminaries (and obvious influences) such as Harry Chapin and Steve Goodman. Like these artists, Purpose tells stories to tell truths. But the school of singing-songwriting is really lodged in the roots of American folksong, in immigrant ballads sung in diverse languages by women and men in the kitchen and out behind the house. In such songs, historical memory carries through generations, with mood and feeling preserved along with names of anti-heroes like Blackjack Davey. These stories provided the seedbed for the modern singer-songwriter, and songs like "A Crooked Line," "Bryant Street" "Oughtta Be a Highway" and "California (Rutherford Hayes in the Morning)" spring fresh from this seedbed.

For writing workshops be damned, storytelling seems to mainly be something that involves a "knack." Purpose is one of the best, and he found his knack out of necessity, he says. "It emerged when I was doing a lot of live shows. I discovered that I could tell a gambling story, or a story about the Peace March, and people would react. Then, with a nudge from Robert Morgan Fisher, the stories started seeping into the songs."

This album's opener, co-written by Paul Zollo, offers a prime example of Purpose's craft. In a masterpiece of minimalist historic fiction, Purpose sets out against a melancholy guitar backdrop just a few sparse details about President Rutherford B. Hayes: his inaugural voyage to California, his receiving of Alexander Graham Bell's new invention, his troubled position on the dawning of concurrent American frontiers. "I'm not sure it's a song about Rutherford Hayes," Purpose says. "It's about history and how history is not what happens, but what's remembered."

Perhaps. After all, how else could Purpose make us care so much about a president who was not too well liked even during his reign? (One wonders if Purpose might next take on the legacy of Millard Fillmore.) But the song also resonates because it evokes the sadness that occasions the birth of any new epoch. It speaks to the 21st century by reawakening the 19th.

The cast of largely nameless wanderers and fate-tempters introduced in Purpose's previous albums now expands in A Crooked Line. Added to "Mr. Schwinn" and the sojourner of "You Must Go Home for Christmas" (from Same River Twice) are the narrators of "Late For Dinner" and "Crooked Line," people captured by Purpose as they are still en route to making their peace.

Other times, Purpose sheds the journeyman's cloak altogether and offers what amounts to hobo's lullabies, songs about the sheer joy of making music and rhymes. The playful "I Lost a Day to the Rain," is one of these. In it, Purpose recounts the only three characters of Western civilization who can be immediately associated with rainfall: Noah, Ben Franklin and Gene Kelly. There's not a fourth. At least, Purpose reports, no audience member on a long string of concerts has been able to come up with one.

One more song bears mention here. "Bryant Street" is among the bravest and most starkly autobiographical of Purpose's songs. It tells of the result of another wandering, this one a modern trip through genealogical tables and Internet search engines. At the end of the voyage was the discovery of a half-sister Purpose never met. I won't say more here; this story is best heard just as Purpose sings it.

In a recent profile in Dirty Linen magazine, Purpose explains his compositional talents: "I write a great half a song." Here, his partnerships with Fisher, Zollo, and Ellis Paul result in another collection of tunes that will stick around for a long while. Musical compatriots include long-time accompanist Daryl S, and the esteemed Dave Carter and Tracy Grammer, stylers of "postmodern mythic American music" whose own musical paths have often intersected with Purpose's.

And so a crooked line is blazed. The sources of this album's title are many: it's a physical description of the border between California and Nevada (and the rest of the country). It's the path of constant touring upon which Purpose the musician has staked his claim. And it's the sideways directions that songs like "California (Rutherford Hayes in the Morning)" find their way to their target, by appearing as one form and then revealing ten more. You have to be careful who you meet on the low roads: there's magic out there.

Michael Tisserand is the editor of Gambit Weekly in New Orleans. His book The Kingdom of Zydeco received the ASCAP-Deems Taylor Award for music writing in 1999.

High class storytelling from unsung hero of US counter culture. Not for long. Purpose is one the key new chroniclers of modern America
~Rob Beatie, Q Magazine

A Crooked Line reveals Darryl Purpose as one of the truly under-recognized singer songwriters on the contemporary scene.
~Rich Warren, Sing Out!

Darryl Purpose once made his living as a professional Blackjack gambler, and like all gamblers, he knows how to tell a good tale. That, plus his sharp eye for detail, his instinctive feel for hard-living, unsentimentalizes characters, and his battle-hardened, but ultimately optimistic view of the world makes "A Crooked Line" one of the best recent collections of contemporary story songs.
~Dirty Linen

The ten songs flow into each other like a colorful short-story cycle. Pupose's vocals, intimate and honey-smooth - are self assured. And his songwriting continues to mature. Echoes of one of his chief influences, Paul Simon, reverberate from track to track.
~The Journal News

Darryl Purpose picks up where he left off with the album "Travelers Code" with impassioned story-telling that only one that actually lived the story could tell.
MuzikMan, Music Dish

Much has been written about Purpose's transition from notorious blackjack player to itinerant folk singer. But what's more important about Purpose's art is his rare dedication to story-telling in song. His new CD, "A Crooked Line", is his most narrative yet, and with Ellis Paul, Dave Carter & Tracy Grammer among the guests, it might be his most attractive.
Daniel Gewertz, Boston Herald

The devil is in the details and Purpose has 'em in spades.
Blythe Christopher, High Bias

Purpose displays a knack for subtle twists that add depth to ordinary imagery. The heart-wrenching "Bryant St", (written with Ellis Paul, featuring the Turtle Island String Quartet) is alone worth the price of admission here.Purpose is a savvy story-teller who never slips too far toward the sentimental or the cynical.
David Todoran, Whatzup

Purpose's music and style of songwriting, taking in country, blues and folk - hints of Slaid Cleaves ("Late For Dinner"), Buddy Mondlock ("Bryant St") and others. And there's exquisite guitar work too...a man who not only carefully crafts his lyrics, but his guitar playing. I implore you to go check him out.
Al Moir, Country Music People

With a delicately soft cracked slightly nasal voice (think James Taylor crossbred with John Prine) that belies his bearded bulk, the fourth album since the former professional blackjack player and peace activist traded gambling and protests for the troubadour circuit back in '96 further confirms his status as a singer songwriter in the great storytelling tradition of Harry Chapin and Mickey Newbury.
Mike Davies, NetRhythms.co.uk

Great albums are few and far between these days, but Darryl Purpose has come close with this, his latest effort. With this album Purpose shows off his skills left and right, dazzling the listener. Not many albums can beat this masterpiece.
Nick Powills, Folkwax