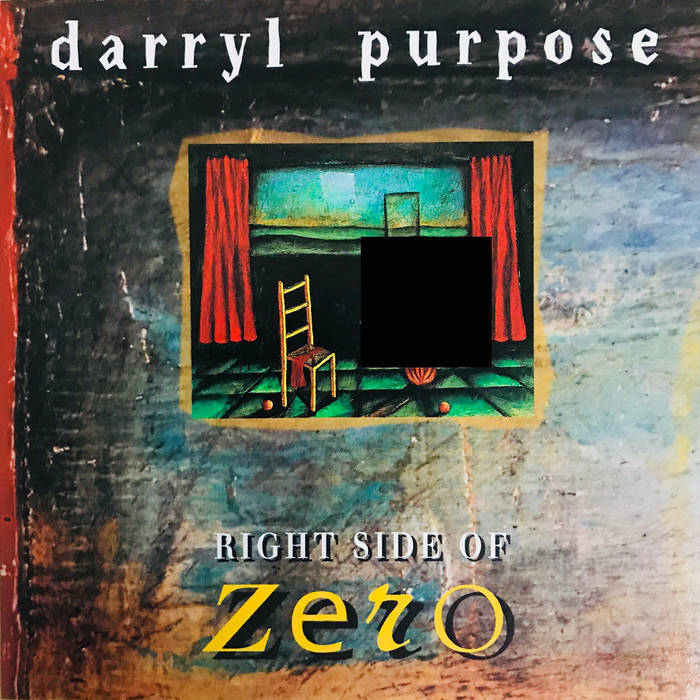 This album is dedicated to Helen Dunham MacEachron.

Liner notes:
i met Darryl Purpose in the late 80's, on the cross country Great Peace March For Global Nuclear Disarmament. Darryl was a member of the Peace March band, Collective Vision.
One day I was reading some promotional material about CV which briefly described all the musicians and what they had been doing in the world before peace walking. Most of the bios contained details of social activism and college education; all Darryl's said was that he played blackjack. Though I didn't know him well then, I teased him about it. "Only job I've ever had." he admitted matter of factly. Years later, listening to the song, "Right Side Of Zero," I understood the acceptance, and strangely, the the loss contained in that simple reply.
"If you don't know where halfway is, how can you know if you're young or old." The gambler's life has scant milestones by which to navigate. (Though I suppose this kind of reflection could haunt anyone) But Darryl's way is not to build edifices to melancholy, because, like the poet and troubadour know, life is lived in the imagination, and imagination is one thing we do control.
Darryl's songs have a way of touching the soul of things. From the stark vulnerability of "Where You Can Find Me" and "I Can't Tell You" to the visionary hopefulness of "Don't Tear Down" and "Victory In The Struggle", the music always plucks some common chord as it kindle's the heart.
Let these songs seep lightly into your own imagination and befriend you there.
~Marc Polonsky

From Earnest Ackerman:
Darryl Purpose is good at what he does. He was once recognized as one of the world's top blackjack players. As a peace marcher, he crossed the U.S. over nine months, then continued on to Russia for a historic walk across the Russian heartland, which culminated in the first-ever, outdoor stadium rock concert in the former Soviet Union, featuring bonnie Raitt, Santana, James Taylor, and Darryl's band, Collective Vision.

In 1996, he returned to music full time and released his first CD. Right Side of Zero spent a few months on Gavins Americana chars and the title track was used in the feature film Deadly Bet.

In his first few years of touring solo, Darryl has earned a lot of attention. In September '97, he won first place in the Sisters (OR) Folk Festival Songwriter Contest and he was invited to be a judge at Sisters in 1998. He also judged the Napa Valley Songwriter Showcase in 1997 after winning that event in 1996. He released his second CD Same River Twice in November of 1997 to great reviews. In January 1998, he won the National Songwriting Competition in Florida with his ballad Mr Schwinn. Later that year, he took first place in the Rose Garden Coffeehouse songwriter competition.

From CDBaby:
Darryl Purpose has led a diverse and interesting life. Lured as a teenager to the world of casino gambling, Purpose went from betting dollars on the graveyard shifts in downtown Las Vegas, to being one of the best blackjack players in the world by his mid twenties. In his late twenties, Purpose left Blackjack to walk across the country (L.A. to DC) with the 'Great Peace March.' Writing and playing music as a member of the 'house band' of the GPM-his first performing experience- was a watershed event for Purpose, leaving him with a permanent thirst for the connection possible through music. This led to another march in the (then) Soviet Union and the first-ever, outdoor stadium rock concert there, featuring Bonnie Raitt, Santana, James Taylor, and Darryl's band, Collective Vision.

Purpose moved into music fulltime in 1996. A thousand shows, and 20,000 CD's later, Purpose has "finally realized his calling as a dramatist for the dispossessed, a chronicler of those Americans who, by choice or by chance, live on the heart's back streets, rising up through the crooked lines like leaves of grass" writes Michael Tisserand in the liner notes from his album A Crooked Line .

It is this knack for telling stories that makes the songs of Darryl Purpose stand out. He says, "It emerged when I started doing live shows. I discovered that I could tell a gambling story or a story about the Peace March, and people would react. Then the stories started seeping into the songs.". From unrequited love in a bicycle repair shop in Mr. Schwinn to spurned to ramblings of a disaffected Angelino in "A Crooked Line," we recognize that the often dark characters presented in those story songs live all around us.

With his distinctive baritone voice, a smoothly proficient finger-style guitar technique which has earned him an endorsement with Taylor Guitars and a sense of drama and storytelling in his lyrics and music, Purpose delivers a charismatic performance that captures coffeehouse and theater audiences alike, including a huge supply of interesting stories from his activities as a peace activist, professional gambler and modern troubadour.

Thank you to Rebecca (White) Harrison